skip to main | skip to sidebar

11/20/09
Almost a full month since I posted here, but I have not been idle. After 10 weeks of on and off work Zelda is finished. Here is the finished carving: 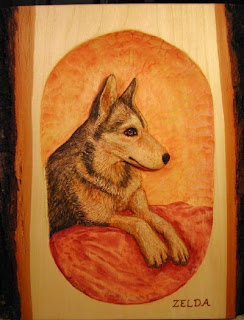 (click the photo for a closer look)
Here are the steps I took to complete the carving:
Texturing:
I didn't take many photos of the texturing process. I used small veiner gouges to try to replicate the flow of the dog's fur. On the muzzle I used a 1/32" wide gouge, and gradually increased the size of the gouges through the 1/16" and 1/8" until I was using a 1/4" wide gouge on the heavier fur areas. 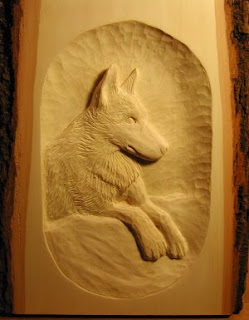 Smaller gouges were then used to break up the larger areas into furrier looking wood. Notice that the harsh line of the ruff has been drastically minimized by the texturing- and I lowered it some before this step too.

Burning:
Burning is a time consuming process, but somewhat enjoyable if you are not rushed. The idea is to further break up the fur into individual hairs- kinda. At least the illusion of individual hairs. I started on the nose where I used just the tip of the skew tool to indicate tiny, short, straight hairs. 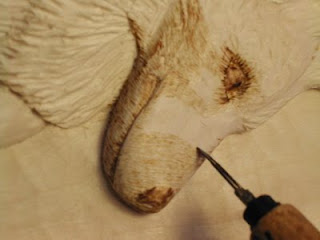 The nose and eye were darkened and sealed with the side of the skew burner.
I worked my way back on the head by following the natural lines of the fur and skull. By burning areas like this I prevent myself from getting carried away and getting the direction wrong.
After the head was done I worked on the left leg with longer and deeper strokes of the burner to indicate longer hairs. 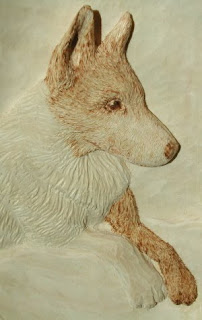 Notice that the hairs on the ears and ruff are coarser and longer too- mostly done with deeper and darker burning.

Painting:
After the burning was done I started to put some paint on. Originally I was going to just stain the wood for a little color, but the burning was too dark to allow that treatment. The buff colored areas needed to be lightened a lot and a that would need paint. The first coat of paint was applied thinly and in muted versions of the final color. 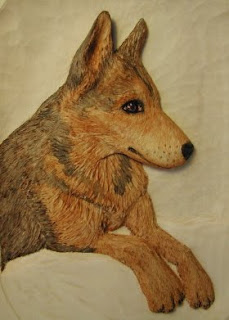 After looking at this for a while I decided that it needed some background color, and I needed it to be there now so that I could judge how to finish painting the dog. A darker background would affect how light her paws would look.
I considered a Mona Lisa style painted landscape but decided that would be too kitschy. Then I thought about making the frame look like a stone archway- but decided against that idea too.
First I put some burgundy color for the cushion and a light amber for the background. 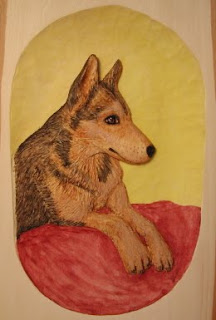 That looked way too garish, so I sanded it with some 220 grit sand paper. 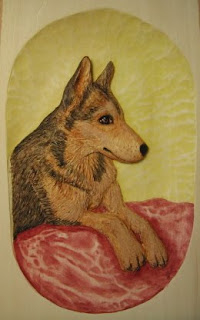 That brought out the highlights that I'd carved into the wood, but they were too light and the background was still too yellow.
So I mixed up a nice intermediate color and applied it all over the cushion and background and wiped it off immediately. The sanded areas picked it up and the shadowed areas were modified. 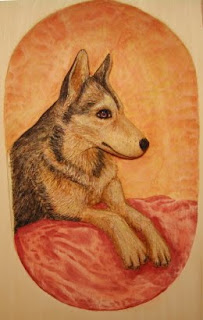 This I like. I was now able to go over the dog's fur with increasingly intense paint to bring up the lighter areas and emphasize the darker areas.
All in all I am satisfied with my first relief carving.
Now- onto my next carving project.
Posted by Donna Menke at 1:24 PM 2 comments:

Progress after a break

10/25/09
Finally I got back to this project today. I have another commission waiting in the wings but this one has the earlier deadline. The Naiad carving was all consuming for a while, and I am quite proud of it now, but it took precedence for all of 6 weeks. Now I can get back to Zelda.
First I needed to fix the frame. Knowing the nature of the person for whom this is intended I know he would not like an irregular frame. We discussed the stone arch idea, but ultimately I decided that the simpler design would be better. 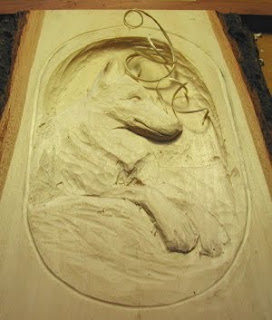 I loved the way these curls of wood came off my new gouge. This is a Ramelson and my older gouges are mostly Swiss Tools. I've decided my favorite is whichever one is sharpest. The gouges fresh from professional sharpening are much sharper than the ones I did. Duh. 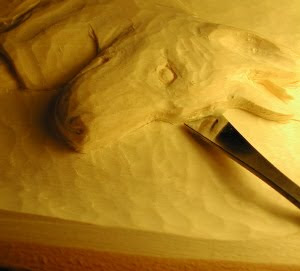 After I got the background and blankie the way I wanted it I worked to get the finish as good as possible. I don't want to have to sand any more than I have to- did enough of that on the Naiad. Having a strongly slanting light like this helps to show up any irregularities, and a razor-sharp #3 gouge makes the job a breeze- time consuming, but not difficult. 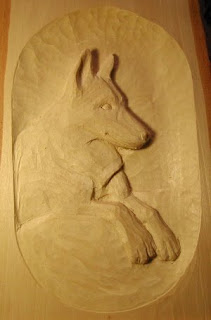 This is how far I got in about 5 hours today. The paws gave me fits, and the ears took some fine undercutting, but I'm satisfied with how everything turned out. Once I get the texturing on there it will look much better- and then the burning- and finally a touch of paint. Don't worry about that harsh line on Zelda's left shoulder- that will be broken up in the next steps and make her 'ruff'.
I'd sure like to see some comments here sos I know someone is following this blog.
Posted by Donna Menke at 7:28 PM 1 comment:

Labels: new shape for frame and some details 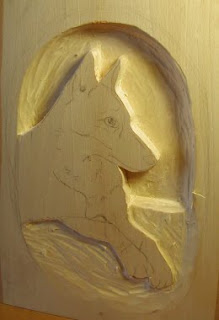 This is after I have trimmed right up to the outline of the dog drawing. I used a knife and various full-sized carving gouges to match the curves. Refined some of the background levels when I found them to be off. 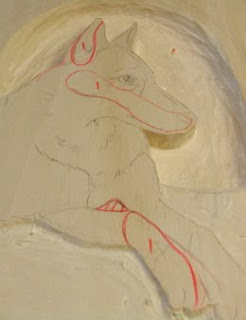 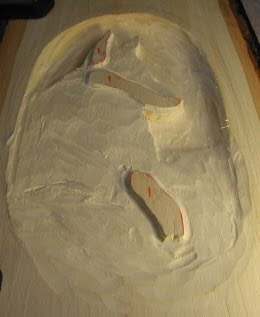 The first major step is to decide what is foremost in the animal. I chose the right foreleg, right side of the head, and the right ear. On the bottom photo you can see how it looked after I removed all but these sections. Since I had 3/8 of an inch left of wood to work with I took off 1/8" in this pass. 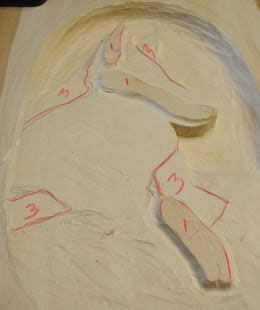 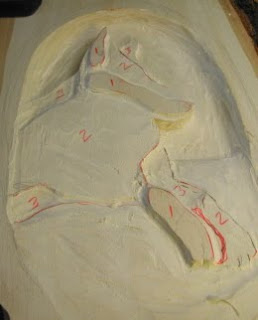 I wanted 3 layers so the next step was to mark where I wanted the 3rd or lowest layer to go. Then I removed everything marked down to that level; 1/8" above the background. With these level established I was now free to sculpt the wood to the form of the dog. First I rounded everything and connected up the layers. Then I studied the photo and looked at my dogs to remind me what went where. It looked a lot worse before it looked better, but I was ultimately satisfied with the results up to now. 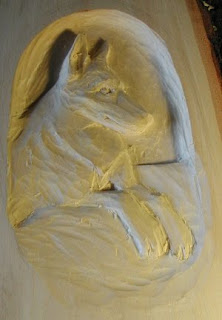 She is still far from completed, but I think most of the form is correct. I'm still debating about how to handle the 'frame'. I kinda like it the way it is- but then thought about some ways to make it more unique. I could turn the archway into a stone arch. I'd be interested in reading your thoughts on this idea.
Next on the dog I'll sand a little to remove the 'fuzzies' and then texture the fur area.
Posted by Donna Menke at 1:51 PM 1 comment:

Zelda: a Pet Portrait in Relief

9/10/09
Last year I promised a good friend a portrait of his dog, Zelda. I took some reference photos at that time and then bought a few slabs of basswood and butternut with some bark left to act as a frame. The dog is really pretty with lots of great color. I decided that I would do a relief with wood burning for color and a little added color. 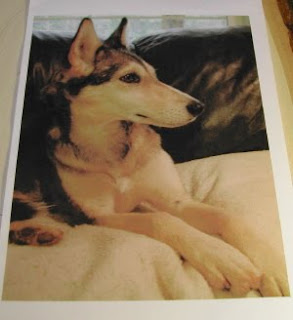 Zelda was a stray so we don't know what kind of dog she is, but she is naturally quite thin and with her coloring I think she must be part coyote. Some think she is a whippet.
The first thing I did was to trace off the photo that I'd made the size I wanted. Then I transfered the drawing to the slab of basswood we had decided would work best. 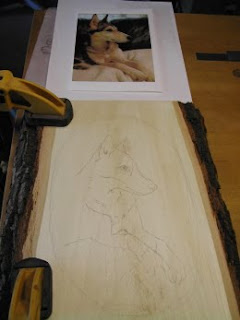 Here I've clamped the wood to my workbench with some very sturdy quick-grip style clamps so it won't move while I work. 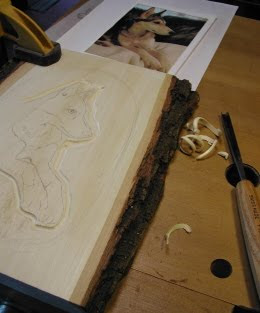 This shows the beautiful curls of basswood that came off the gouge as I went around the image. Like buttah. Great wood, and fun to carve with. I haven't done many relief carvings, but I do know that the background is removed first, so that is what I did. The wood is 7/8" thick so I decided to remove the ground down 1/2" to give me lots of wood to sculpt the dog's head. 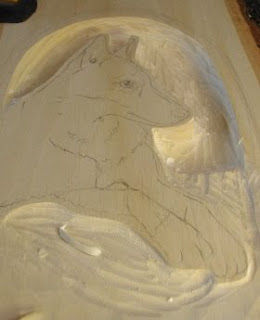 I almost made the mistake of removing all the background and leaving the dog floating in mid air- but I remembered in time to leave enough wood to make a pillow for her to rest on. The next step will be to remove the background wood right up to the outline.
Posted by Donna Menke at 4:20 PM No comments: